Pick a Genre, Any Genre, or Two or Three

When I began writing fiction, everyone assumed I was writing science fiction. But I wasn’t. 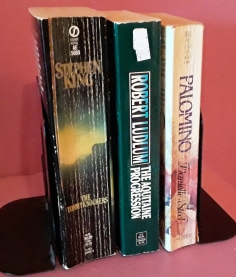 My reading taste has always been eclectic. When I was younger, my favorite authors wrote horror/sci-fi, spy thrillers, and romances.

My taste slowly evolved. For a long time, I read legal and political mysteries. I also like sagas. 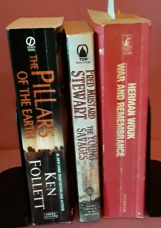 Then I discovered science fiction.

Next, I came across books with magic.

I’ve always had an affinity for the tales of King Arthur and Merlin the Magician.

For the last decade, my favorite genres have been science fiction and fantasy.

These classics are my all-time favorite books. A family saga and world building.

I read the Game of Thrones series by George RR Martin long before it became a TV series. (The first book is on loan to a friend.)

When I sat down to write my fiction, the stories in my head were women’s fiction. Stories about relationships and how we react and change due to the events in our lives. I’ve read some women’s fiction over the years, mostly when I want an easy read. It surprised me a bit, but that’s what I was compelled to write.

On a fluke, I wrote a spiritual story and entered a short story contest. My beta readers cried, and I won an award. Then, about a year ago, I saw a contest for sci fi, fantasy, horror, thriller, or any combination. I decided that could be fun.

My story started as science fiction. By the third page I had added fantasy elements. It became a thriller by page 5. I added a bit of horror around page 10. My beta readers said it was dark and creepy. I was thrilled. We want to provoke emotions in our readers.

I ran out of time to polish the story but entered the contest anyway. I didn’t win, and I’m revising that story. There’s another story in my head. This one is fantasy. I’m not sure where it’s going, It might end up being a love story.

Are you confused yet?

Writers, editors and publishers tell you to stick with one genre. Maybe that works for most people. It doesn’t work for me. The stories I write are the ones that I’m compelled to write. The characters talk to me, and they don’t shut up until I write them down.

We’ll see where it all takes me.

What genre do you prefer for your reading and writing? Or do you cross genres like I do? Do you think the “experts” are right? (I don’t.)

A Tale to be Told

Do you ever get a story in your head that won’t leave until you write it down? Here’s my most recent one.

Trixie backed up against the door, screaming. Why wasn’t her mom coming? Trixie was alone outside on the deck and the monster was coming closer.

It approached the steps to the deck and Trixie looked around, frantic for a place to hide. Her eyes darted to the grill, the lounge chairs, the glass-topped table and chairs, and paused on the storage compartment for the chair cushions. She could hide in there. But she didn’t know how to open it, and she didn’t have time to figure it out.

With one last cry, she slipped off the side of the deck and ran into the yard. The monster swiveled its head, tracking her, and Trixie froze. A light breeze started up and Trixie could smell the foulness of the creature.

There. The car. Trixie ran to the car and slid underneath. She was small. The creature was at least five times her size. Surely it couldn’t fit under the car. She laid flat on her stomach and peered out. “Aaaah!”

It was bent over, looking under the car right at Trixie. She backed up so she could no longer see its face, only its spindly legs. It wasn’t moving. It was silent. Trixie wondered if the monster was strong enough to lift the car off her. But wait, did the monster have arms? She scooted closer, cringing when the creature came back into view. The spindly legs held up a giant body, topped by a skinny neck and small head. It had tiny black eyes and a long pointy nose. It didn’t appear to have any arms, which brought Trixie a small measure of relief. Then the breeze blew up again and Trixie realized the creature had wings. It could carry her off. She cowered back under the car, crying.

~ Trixie could smell the foulness of the creature. ~

A shout came from the deck. Finally.

“Hey, get away from her, go away,” her mom shouted, advancing toward the monster.

“It’s okay Trixie. Just stay there until I scare it off.”

Her mom stood 5 feet from the monster and continued shouting yet it didn’t move. Trixie hoped it wouldn’t attack her mom. Then, her mom began banging a wooden spoon on a pot, all the while yelling. Trixie smiled. Her mom looked ridiculous. She was saved, saved!

The creature stuck its head back under the car, and Trixie cried out in surprise. It wasn’t leaving. She saw her mom point the remote at the car and the horn began honking. That, at least, gave the creature some pause and it began backing away from the car.

“Over here, Trixie, quick.” Her mom motioned her over.

She crawled toward the rear of the car, ready to run for it, when she saw another set of spindly legs. Oh no! There were two of them.

Breathing heavily, she peered out at her driveway. The monsters were there, looking around, seemingly confused. They couldn’t find her!

She walked stealthily back toward her house, where she saw her mom holding open the door to the sunroom. Safety! She scooted in the door, which her mom slammed and locked. The monsters had apparently seen her because they now stood right outside the sunroom door. But they couldn’t get in. They peered in the glass door and Trixie shivered.

Trixie began to speak but was blindsided by a body slamming into her. She couldn’t believe it. Now she had to fight her stepsister. Trixie had just been adopted into the family and had been looking forward to having a sister and two brothers. She’d been on her own all of her short life. Apparently, her stepsister didn’t feel the same about getting to know her.

~ …was blindsided by a body slamming into her. ~

She wrestled with her sister, who seemed to be out for blood, while her mom shouted at them to stop. As her mom approached the two of them, looking stern, her sister scurried into the adjoining dining room. Her mom shut that door, shaking her head.

“I’m so sorry, baby.” Her mom picked her up and cuddled her on her lap. “You’ve had a rough morning. This really is a good place. You’re not hurt, are you?” Her mom looked her over while Trixie cuddled close, letting out a sigh of relief.

As her mom continued crooning to her and cuddling her, Trixie purred and closed her eyes. The monsters were gone, and the sun was shining in the windows creating a pool of warmth where she lay. Trixie was exhausted. Time for a cat nap. She was safe.

This is 5-month-old Trixie.

These are the monsters trying to get at her under the car.

Did you figure it out? It’s a true story. Wild turkeys show up in our neighborhood every year around Thanksgiving. Usually, they shy away from people. This year, they were exceptionally bold, and they continue to come around. Trixie stays inside more. Her new sister still doesn’t like her; her new brothers are happy she’s here.