When I first contemplated writing fiction, I had no idea how to do it. Nevertheless, I forged ahead, rising early every morning and writing ferociously. In my quest to figure out what the heck I was doing, I pulled out a book on writing that had been on my bookshelf for a long time. It was the perfect book for me to read at that time.

The Forest for the Trees by Betsy Lerner is a great book for new or doubting writers. 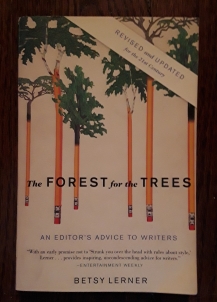 Lerner got me. She knew what made me tick and why I felt the need to write. She understood my initial fears and the pain from derisive friends. “When I asked the readers of my blog,” she said, “if they remembered any hurtful things people had said to them about their writing, the comments poured in.”

Silly me. I thought everyone would be excited for me and encourage me. Instead, some of them laughed and even rolled their eyes. A common response was, “Yeah, I’m gonna write a book, too.” I was shocked at the disdain I encountered.

A few people encouraged me and those were the ones I clung to as I continued writing. My favorite piece of encouragement: “It’s about time you write a book!”

When I first began telling people I was writing a novel, many of them laughed or rolled their eyes.

As I wrote, another surprise emerged. In my writing, I was revealing a lot about myself – not in an autobiography or memoir but rather in the way I see the world and weave life experiences into the story line. When Lerner describes different types of writers, I immediately identified with the one who was worried about what other people would say.

What would my family and friends think? Was I revealing too much about myself? The fears were quick and unexpected and fierce. Fear of not being heard. Fear of being misunderstood.

“Writers tend to censor themselves,” she said, “for fear of what other people think, especially those at home.”

Now, I don’t care. I write what I write. If I’m revealing things about myself, so be it. If people see themselves or are critical, I don’t care. I’m not setting out to hurt anyone. I am writing from my life experiences, which are not like anyone else’s. Yet, my hope is that my readers will say, “Oh, I feel like that, too.”

Persistence in this craft was another unexpected necessity. If you receive nothing but encouragement, wow, that’s great. But I think most of us experience something different. The criticism of so-called “well-meaning people”, who tell you writing is an unattainable ambition, combined with your own self doubt can cripple you. That’s when ego and persistence come into play. I’ve always had plenty of both, which has brought me some trouble in the past but for which I’m now grateful.

Criticism, combined with your own self-doubt, can cripple you.  That’s where ego and persistence come into play.

Lerner addresses this: “…the degree of one’s perseverance is the best predictor of success. It is some combination of ability and ego, desire and discipline, that produces good work.”

She says writing is a calling. If you have to do it, you’re a writer. “Asking whether you’ve got it, whether you should stick with writing or quit, is a little like asking if you should continue living,” Lerner said. “For most writers, being unable to write is tantamount to suicide.”

When I got to about 40,000 words, people stopped rolling their eyes. Up until that point, I felt very alone. I received about 10 percent encouragement and 90 percent discouragement. So, I stopped telling people what I was doing.

For most writers, being unable to write is tantamount to suicide.”

And then when I didn’t have instant success, like I expected, more derision. And I beat myself up. Could I do this? Maybe I wasn’t good enough. Nevertheless, I kept going. I’m still going. And Betsy Lerner’s book helped me persevere.

Lerner also gives practical advice about agents and editors (this may be outdated by now), but it’s the first part of her book that appeals to me. If you have any doubt about your life as a writer, read it.

What books on writing have encouraged you?

This entry was posted on Tuesday, August 6th, 2019 at 8:07 am and is filed under creative writing, inspiration. You can follow any responses to this entry through the RSS 2.0 feed. You can leave a response, or trackback from your own site.

10 Responses to Encouragement or Disdain